The Journey (Stepping into your full self) 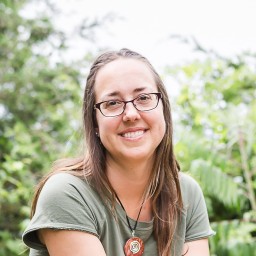 Sign up for my Newsletter for monthly updates and tips

Below is a story I wrote sometime last year.  I was my way of capturing the feelings I was having about stepping into my full self, including stepping into coaching.  I had built walls around myself as a sort of protection and though I knew they were no longer serving me, I had a lot of fear about breaking out.  Yet I also had a sense that beyond my walls were gifts I was missing out on.

I'm curious if you see yourself at all in these words. Have you built a fortress around yourself? Are you stepping out? How has that felt for you? What gifts are you finding on the other side? Share with me in the comments!

When she was small, it was just her and the great oak. She felt peaceful and steady in its branches. Rooted next to the great trunk. This was the place she was always herself. The oak always accepted her as she was. Branches open to her at every moment.

As she grew, she began to learn the rules. Rules about what’s okay and what’s not. About who she was supposed to be. And she learned about people and their reactions. And their judgments. So she made her way back to the roots of the oak and its wide open branches. And she built.

She built a fortress around them. A fortress to keep her safe in this place of refuge. A place where she could be fully herself. Apart from reaction and judgement. She left cracks in the wall. She had to. How can a human live in a world of humans without interacting at all? The cracks allowed her to meet and build connections with people without allowing them too close. As long as they stayed outside the wall they couldn’t fully see her. And if they didn’t fully see her, they wouldn’t react or judge. At least not to the deepest parts of her.

She felt safe here. But also lonely. She longed for more than just the great branches of the oak to be open to her. She longed for the warmth of the open arms of humans. She longed for a way to be as grounded in herself with them as she was by the oak.

As she readies herself to leave the Fortress, she stands in the courtyard, bare foot, next to the great oak. It's branches cover her like a soft blanket - her last comfort before she leaves. Her toes in the grass search for the steadiness she so desperately desires. The air around her is still and quiet. Controlled. The outside chaos muted here.

She sighs, looking up to the sky in search of direction. The soft drape of her clothes stirring in the breeze. Her hair lies loose today. Freed from its usual containment. A strand catches in the breeze, covering her face and she bats it away. Another big sigh and she starts her journey toward the gate. Shoulders hunched under the weight of her uncertainty. Her feet feel heavy, as if the roots of the great oak are reaching out to keep her. With a full body shake, she grits her teeth, determined, and marches toward the gate.

Upon arrival, she notices the gate ajar. She peeks through the crack and notices a lock on the outside, severed by some unknown force.

What kind of fortress locks from the outside? As if to keep the danger in?

She gives herself a once over. I don't feel dangerous!

Determination swept away by this puzzle, she hesitantly pushes the gate open so she can peek outside. At once, her eyes widen. She's expecting a vast prairie, brown and desolate, exposed to the elements. Instead, she finds an open space filled with lush green grass. What's more, sprinkled across the prairie like pillars are people. They all wear warm smiles and they glow with warmth and welcoming. Not strangers, no, but her people. The ones she would speak to through the cracks of the fortress. Also, those from before. In their eyes she can see herself and all of her struggles. Yet there is not sadness or anger in their eyes, only triumph.

She smiles from the tips of her toes all the way to the ends of her hair and glides forward. Glimmering tears slide down her face as she realizes. All this time this has been out here waiting for her? All this time she kept herself locked away from this?

One step onto the grass of the prairie and she feels the strength of the people grounding her feet. All the triumphs steadying her. She strides out into the field and stops. Her arms reach out, face raised to the radiant sun and she inhales. As she does so, the people vanish, leaving her filling the space they occupied. She exhales, her love reaching to every corner of the expanse. And as a storm rumbles in the distance, she sits, surrounded by a stillness that cannot be rippled by the coming storm. A stillness that reaches deep.

As she sits, she begins to notice an echo of the distant storm in her chest. A rolling, churning, thundering mass. Eyes closed, she reaches in and sees. Like Jupiter's eye. A swirl of red, white, and yellow energy. Bright. Powerful.

She feels it reverberating in her chest, seeking exit. Ah, you again. She sighs. She's been protecting this storm all her life. Cradling it close. Letting loose rumbles of thunder now and then when it got too big to hold.

Upon closer inspection, she begins to feel all of the strands of the storm. Each particle of its cloudiness a moment she kept silent.

Rage she kept in there.

A song she did not sing there.

Each instance of her silence feeding the storm, building its power. Sadness envelopes her. Then anger, rage, joy, ecstasy. She opens her mouth and a scream escapes. Deep, guttural, and strong. At the same moment, the skies open. Rain pours down, washing over her.

Inside, the storm still churns, but it is pure. Brighter. Warmer.

She relaxes and its warmth spreads through her whole body. She feels a power tingling through her and extending around her. She is ready.

She rises and takes the first step.

As she walks, she begins to see structures on the horizon, varying in stature and construction. Some are fortresses like the one she left behind. Some small houses. Some flimsy tents. She stops to visit each one. As she approaches, a door opens and a face peers out. Another, like her, who keeps themselves captive inside. Eyes search, drawn to the fire within Her. As she approaches each one, her eyes reach into theirs and she smiles. A smile so warm it spreads to their face.

“You cannot imagine how much you are loved”, she says. The words cupping their cheek with affection. Her eyes keep reaching. Her whole body attuned to the person she addresses. Standing firm as a tree. Radiating warmth like the sun.

“Emerge and Speak,” She says softly. “The world needs to hear your voice. Only your voice can open the doors that need to be opened.”

With a nod of encouragement, she moves on to the next. Like an oak that will stand for centuries, she does not rush. Each person given the time and attention they need. Each person sent off on their own path out of their own fortress.

What do you need to say? Speak it. Someone, somewhere, needs to hear it.  That someone may even be you!